ARE YOU A SQUID EATER? I will NEVER eat squid ’cause this mouth doesn’t want to get pregnant! 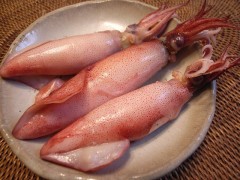 The Journal of Parasitology has reported that a South Korean woman’s mouth ‘fell pregnant’ with 12 baby squid after she bit into a squid!

The 63-year-old woman was eating a partially cooked piece of squid that still had its internal organs intact. As she bit down, she felt a “pricking and foreign-body sensation” in her mouth. She immediately spat the squid out, but after experiencing “severe pain” she went to the doctors and they had to remove “twelve small, white spindle-shaped, bug-like organisms stuck in the mucous membrane of the tongue, cheek, and gingiva.” OMG!!!!!!

Doctors identified them as “spermatophores,” which are kinda like pods of squid semen! 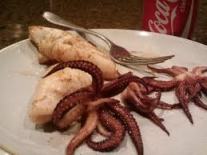 “The remaining part of the raw squid consisted of the testis and the sperm bags. After removal of all stings, the pain reduced, and the wound healed in due course.”

What’s disturbing is that this is not the first time it happens! Another case of squid insemination was documented last December, after the patient had eaten raw seafood.

There is a SILVER LINING –> IT’S RARE TO FIND WESTERN CUISINE THAT STILL SERVES THE SQUID WITH THE INTERNAL ORGANS INTACT!!