Do you believe in reincarnation? This 10-year-old’s story might change your mind on the topic… he is pretty convincing! 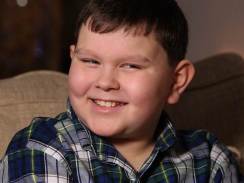 It started with nightmares of Hollywood at the age of 4 & later Ryan looked at a still from an early Hollywood movie, pointed out some random obscure extra and said, “That’s me. That’s who I was.” Yep… Ryan believes that he’s the reincarnation of an obscure old-time Hollywood figure named Marty Martyn, and he’s been citing eerily accurate facts to back up his claims. Facts that even google would have a hard time finding!

Under examination, a doctor was able to confirm 55 of the factual details that Ryan divulged about his past life as Marty Martyn, who died in 1964 at the age of 61. In fact, an issue regarding Martyn’s age would actually be proven by Ryan, whose claim exposed a mistake in the acknowledged records.

Could it just be his parents telling him what to say? Mom claims that growing up in a Baptist church — the concept of reincarnation would go against her religious beliefs. The amount of research involved in the fabrication of these memories would be extremely extensive… and why?! For 15min of fame?

So interesting! DO YOU BELIEVE IN REINCARNATION?