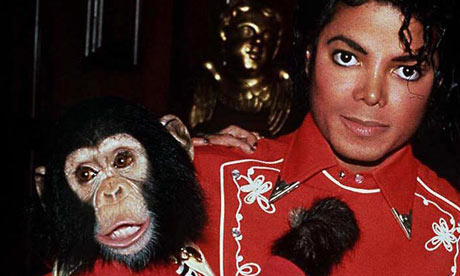 It’s said that MJ pestered surgeons for 4 years for advice on how he could achieve his dream of having a conversation with his monkey friend and constant companion during the mid-80s (often sharing his bed & even going on 1987’s Bad World tour).

His sister La Toya told a British tabloid: “Michael was always wanting to know how to make Bubbles speak and talk. They definitely communicated. One morning Michael called me and said ‘You have got to see this – he mimics everything I do.’ “He wanted to give him vocal chords and asked doctors ‘Can I given him an operation so I know what his thoughts are’.”

But the plan was dashed because surgeons said Bubbles might not survive the surgery.

Michael had to give Bubble (now 26 years old) to a monkey sanctuary in 1988 because he had become too big.

Ahhhh if only technology had come that far! I’d love to know what Bubbles has to say now!