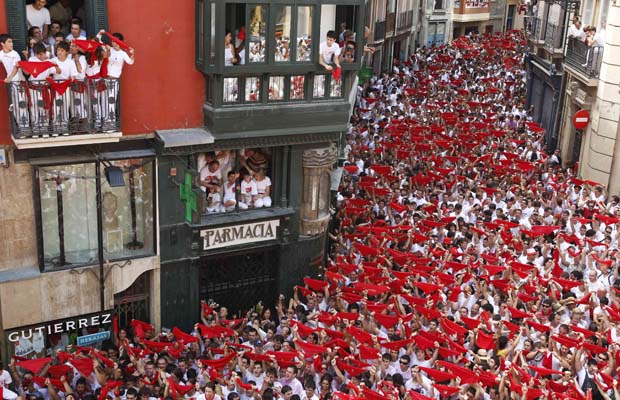 Looks like the vuvuzela contraversy of the World Cup has spread all the way from South Africa to Spain!! 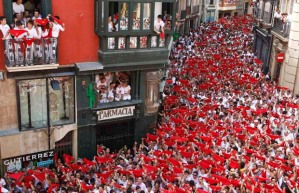 The mayor of Pamplona, Spain, banned the noisy african trumpet for the opening of the famous San Fermin running of the bulls. Despite the ban, thousands packed Pamplona’s streets yesterday, most dressed in the traditional outfit of white shirts and red handkerchiefs, to watch as city officials fired a “chupinazo” cracker at noon to kick off the nine-day festival!

The crowd’s excitement was raised even higher this year because of the semi-final World Cup match between Spain and Germany going down tomorrow. With football fever running high in Spain, the clash with the match was one of the reasons the town banned the sale of the vuvuzela horns!

The spectacle of the bull runs, popularised internationally by Ernest Hemingway’s 1926 novel “The Sun Also Rises”, involves watching runners try to out distance the six bulls released every day to run from their corral through the old town’s narrow, cobbled stone streets. The festival also features a range of concerts, street parties and dances, and the revelers’ nightly ritual of spraying each other with red wine.

The bull runs have claimed 15 lives since 1911 and each year dozens of runners are injured.

The bull runs is held every morning at 8:00 am (Spain time) through July 14th. Would you ever do the run of the bulls? I think I’d consider it!! I know… I am crazy!!