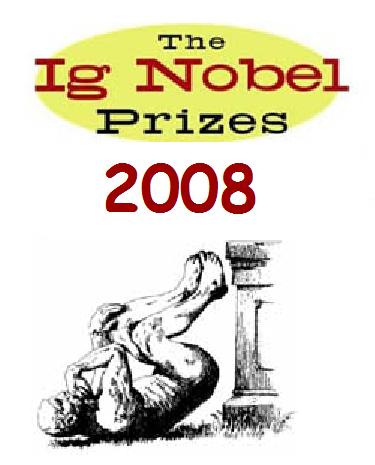 Every year the Ig Nobel Prizes, a parody of the real thing, are awarded to researchers for their truly tought-provoking discoveries!!! Ten achievements that “first make people laugh, and then make them think” are acknowledged & seriously make you wonder how these scientists succeeded in receiving grants to do these studies!!! I think THAT’s the real achievement here!

The 2008 Winners (for you scientists at heart, I’ve linked the actual studies!!):

Nutrition: 2 British reasearchers won for electronically modifying the sound of a potato chip to make it appear crisper and fresher than it really is, demonstrating that food tastes better when it sounds more appealing.

Archaeology: a pair of Brazilian archaeologists determined armadillos can change the course of history by mixing up the contents of an archaeological site.

Chemistry: It was a tie!!!!!!! 3 scientists (from Harvard none-the-less!) won for discovering that Coca-Cola was an effective spermicide AND 4 others from Taiwan won for accidentally proving it was not!!!

Cognitive science: Japanese researchers discoved that slime molds can solve puzzles (Seriously–how can you even study that!!!).

Literature: David Sims, from the U.K., won for his study “You Bastard: A Narrative Exploration of the Experience of Indignation within Organizations”.

Physics: 2 California researchers proved that heaps of string or hair will inevitably tangle. They called it Spontaneous Knotting !!! (I could have done this one!)

Peace: The Swiss Federal Ethics Committee on Non-Human Biotechnology and the citizens of Switzerland for adopting the legal principle that plants have dignity.