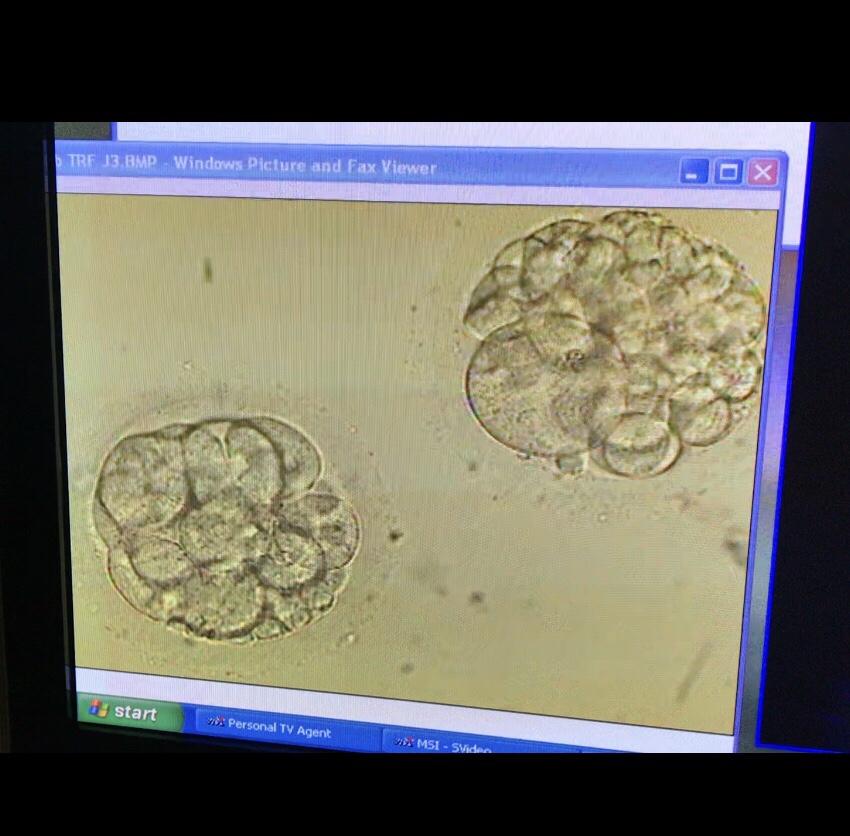 My last doctor’s appointment saw me, surprisingly, going forward with another round of IVF. I had the minimum seven follicles I had set myself in order to try again. Then didn’t. Then did again… just getting to decision day was a rollercoaster in itself.

My last ultrasound on the Wednesday showed that six follicles were responding well to the hormones and two little ones were fighting to grow. During my last round of IVF, it took a follicle of 15mm or more to produce a mature egg and I had two in the 20s, four around that 14-15mm mark and two below 9mm. Part of me hesitated because that only counted for six follicles with a chance of a mature egg. However, I had to keep in mind that I had told myself a minimum of seven follicles, not a minimum of seven follicles of a certain size. At some point, you have to stop overthinking and take that leap.

As I handed my credit cards to pay for the $7500 procedure, I joked with Dr Mahutte that the pressure was now on him! More than one thousand people had read my latest blog, posted only twelve hours prior, and they all wanted a baby!! The clinic laughed. I felt relaxed. The decision felt right. I’d be back on Friday for my egg retrieval.

Egg retrieval is the toughest part of the IVF process, not only because it’s painful but because everything rides on what they will extract from you that morning. How many follicles have eggs? How many of those eggs will be mature? How many of the mature eggs will fertilize? What quality will they be? And finally, how many will develop and survive the 3-5 days before transfer?

You arrive at the clinic. They hook you up to an IV. You are brought to the operating room (where I played disco music this time around). Then the doctor and nurse prep you before poking you with a huge needle attached to a “mini-vacuum”. Eight follicles equals eight times feeling pressure until the needle finally pokes through the membrane and extraction can be done. I know my medical lingo isn’t on point, but it’s easier to just say that eight little holes where created that morning, hence the IV, monitoring & post-op stay before you are allowed to leave a couple hours later. They keep you longer if, like me, you are single and taking a cab back home, as the drugs may make you loopy.

My recovery room nurse was a sweetheart and since I was the first one in, we had a chance to chat about everything and anything. In passing, she mentioned that she had once been a urology nurse. “My father was a urologist! Who did you work for?”. I felt tears come to my eyes when she named my father’s great friend and colleague. I told her who my dad was and she said that she had met him a couple of times! I cannot express how I felt in that moment; like my dad – who passed nine years ago – was sending me a little sign that he was there with me and following this journey.

Let’s continue on this rollercoaster that is IVF:

UP: I was rejoiced to find out, even before leaving the clinic post-op, that six eggs had been retrieved. That was 1 more than last time!

DOWN: 24 hours later, I found out that of the six, only 2 were mature. That was one less than last time.

UP, UP, UP: Of the two, one was a grade 1 (best quality) and the other one was a grade 2! Last time, the two surviving eggs where grade 3. Not only are they better quality, both fertilized!!

UP EVEN HIGHER: another 24 hours later, I found out that both had survived the night and transfer would happen the next day.

I was sailing high!

With my friend Beatrice as a tag along, I went into the operation room to find a picture of two pretty nice embryos! 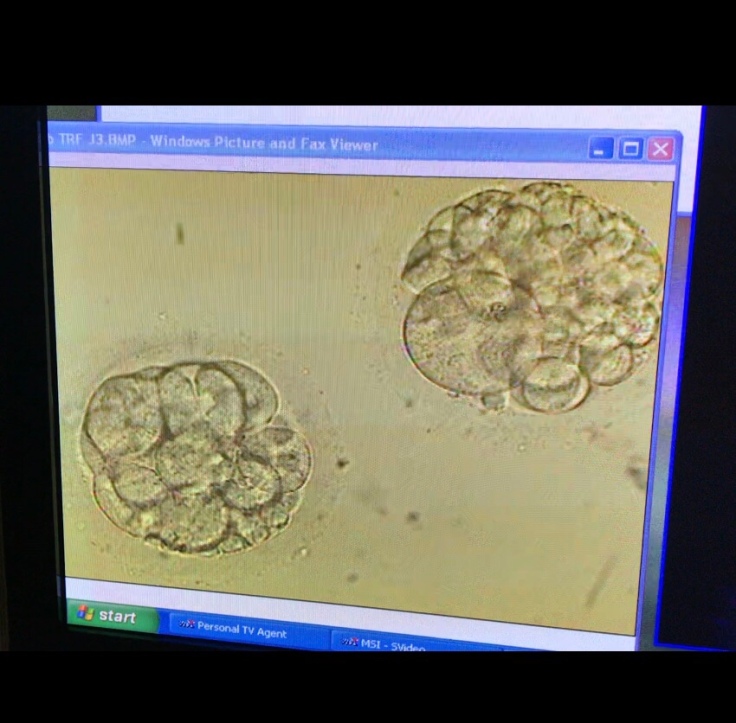 My grade 2 embryo (on the left) had only developed to five cells (as least seven is the norm), so it was downgraded to a grade 3. Cue rollercoaster crash.

However, my grade 2 embryo (on the right) had twelve cells and was upgraded to a grade 1! What an overachiever! Cue rollercoaster soaring high!

Both were transferred. Within 30 minutes, we were in and out of the clinic. I was now PUPO – Pregnant Until Proven Otherwise. My due date would be near Christmas (my dad’s favorite holiday) or, if pregnant with twins, around my mom’s December 8th birthday. Again, I felt like it was a wink from dad.

I have to say that I was pretty proud of myself during this two week waiting period. I took time off work and truly did nothing. I felt good. I didn’t read too much into the symptoms, as I had learned that the progesterone you take post transfer can cause pregnancy-like symptoms. I was stress free and happy. If it happens, it happens. If it doesn’t, I still have the adopted embryos on the way. Of course, I wanted it to happen but I also didn’t want to drive myself nuts wondering and over-analyzing. I therefore resisted buying a home pregnancy test and seeing for myself before hand what it would indicate. That’s a tough feat!

I got excited when, contrarily to my previous IVF attempt, I didn’t get my period before test day. However, that could also be due to the progesterone. It’s so infuriating because you just never know, so it’s hard not to get your hopes up! Every little sign makes that rollercoaster climb higher and higher and, as much as big rollercoasters are fun, the higher you go, the higher you fall from.

I walked into the clinic, joked around with my nurses, peed in the cup and gave out some blood! I was rewarded with a timbit and a “we’ll call you later, Kim! Good luck!”

Last time, they had analyzed my urine before I left, so I at least had a small indication. This time, nothing! Ahhhhhhhhhh! I couldn’t wait any longer and stopped into the pharmacy on the way home to buy a pregnancy test. At least, I’d be prepared for the call with the blood test results.

I wish I was still on that rollercoaster high. Within three minutes of peeing on that stick, my rollercoaster came crashing down… there wasn’t even a hint of a second line. The “not pregnant” was pretty loud and clear.

Tears. Mourning. Sleeping. Tears. That’s how I spent the 10 hours before the clinic called back with the blood test results. I drove to my mom’s to lie on my childhood bed and wait.

7:03pm. Voicemail. I missed the call. I dialed in and listened to the saddened voice of the nurse. Confirmation of the negative result.