Man oh man! I wish these were around when I traveled around Europe back in 1998-1999… my drinking budget would have been a tad less in the red!

From the streets of London and Brussels to the pastures of Belgium, Molson had the brilliant idea of bolstering national pride by placing beer fridges across Europe. Why would that make us proud and what’s inside those fire engine red fridges? Free Canadian beer! 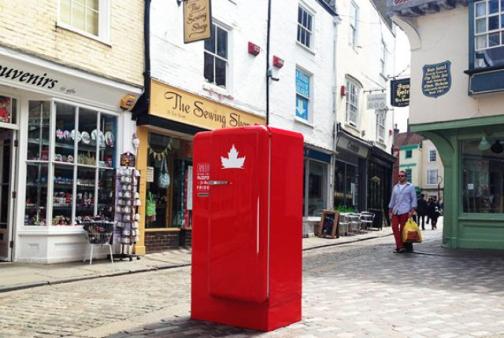 Heaven to many BUT, unfortunately for most, it’s locked! There’s only one way to open it and, lucky for us, it’s by scanning a Canadian passport!! A webcam inside snaps a photo of the passport, unlocking the swill when it recognizes the document as 100% official maple leaf.

What a great advertising stunt Molson! I love that those Americans backpacking with a Canadian flag stitched to their bag will have to fess up now… “Oh… I can’t open the fridge… I… Uhmmm… forgot my passport…” Ya ya you American intruder!

One thought on “FREE BEER… Only For Canadians!”