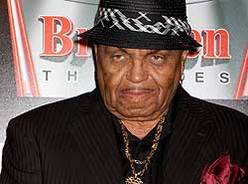 He’ll do anything to smooch on to his son’s death… Michael Jackson’s father is set to launch a fragrance collection dedicated to his late son!!

Joe Jackson has teamed up with a French perfume company to create the male and female scents, called Jackson’s Tribute and Jackson’s Legend, which are inspired by plants grown at the late King of Pop’s Neverland Ranch.

The fragrances will be released on March 7 in the U.S. A portion of the proceeds will given to a number of the late singer’s favourite charities.

A representative for Jackson’s estate has confirmed the project has not been authorised by them, branding it “a Joe Jackson deal”. Ya–not surprising! At least, it won’t smell like Joe Jackson… rotten!

One thought on “Oh Lord!”