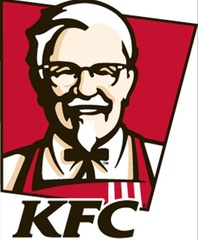 After a new survey found that young adults don’t really know who Colonel Harland Sanders is, KFC decided to raise awareness of its founder!

In the survey of KFC’s key demographic of age 18 to 25, more than 60 percent couldn’t identify Colonel Sanders in the KFC logo, 50 percent thought he was a made-up icon, and 30 percent had no idea who he was. Ouch… poor Colonel!

FACTS: Sanders, born on Sept. 9, 1890, used a $105 Social Security check to start KFC when he was 65. That first restaurant, named Sanders Court & Cafe and built in 1930 in Corbin, Ky., would turn into a worldwide chicken empire later known as Kentucky Fried Chicken.i In 1976 he only ranked behind heavyweight champion Muhammad Ali when it came to being the world’s most recognizable celebrity.

What will KFC do?! Hit the internet of course!! On what would have been his 120th birthday, It’s taking to Facebook, Twitter, MySpace, the KFC website and using other digital media to introduce young adults to Colonel Sanders.

The “white haired KFC dude” is also front and centre as the subject of a new art contest where one lucky winner will get $1,100 — $100 for each of the 11 herbs and spices used for the Original Recipe chicken — and get to paint a new portrait of Colonel Sanders, using paints into which KFC has blended the 11 secret ingredients!! Yummy!! Finger paint for finger licking goodness?!?! haha

You can upload your portrait of Colonel Sanders at http://www.kfc.com/portrait through Sept. 30. Good luck!

One thought on “Colonel who?!!”