I don’t think I’ve ever been THIS drunk!

A Polish man living in Germany was stunned to find out that he had a bullet in his head!

The man recalls receiving a blow to the head at a New Year’s party five years ago, but had kind of forgotten about it because he was very drunk!!

The discovery was made when he recently went to the doctor to have a lump examined. Police are not treating the incident as malicious: “It may have been a shot fired up in the air which entered his head on the way down.”

The bullet has been removed and the man is doing fine.

Check out this X-Ray of the bullet in his head!! 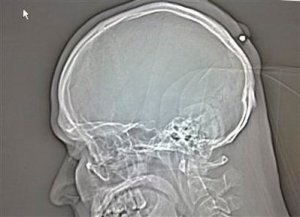